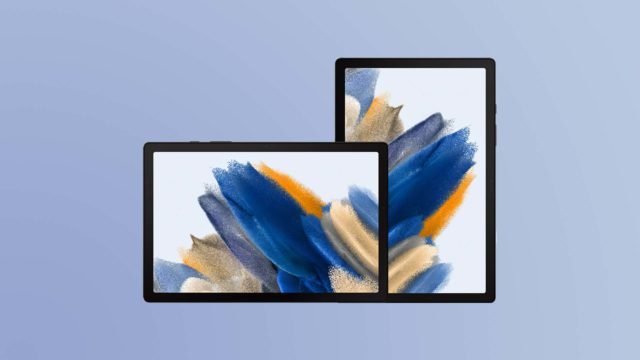 Samsung Galaxy Tab A8 slate will come  in the not-too-distant future – and newly leaked images show off what could be press renders of the Android device. The Samsung Galaxy Tab A8 is going to be the budget tablet offering from the company and is lined up for launch in early 2022. With that being just months away, the images were posted online, and don’t really reveal many surprises about the tablet. We’ve got fairly thick display bezels on show, as you would expect from a budget slate, and it looks as though the power and volume control buttons are in their usual place on the side.

According to what being revealed, there is going to be a Ziguang Zhanrui T618 chip making up the core of the tablet. The starting version is come with 3 GB of RAM but will have storage of 32 GB and 64 GB. There is going to be a microSD card slot too to allow for additional storage. The tablet also returned Geekbench 4 multi-core scores of 5200 and above, which makes for a decent figure. Plus, the Bluetooth certification listing has revealed that the tablet features Bluetooth 5.2.

The Galaxy Tab A8 will feature a 10.4-inch IPS LCD display with a resolution of 1920 x 1200 pixels and a 60 Hz refresh rate. Going by previous leaks, other specs revealed include a 7040 mAh battery, an 8 MP rear-facing camera,  a 3.5 mm headphone jack, sleak matal body and a USB  Type-C port. There is going to be a quad-speaker arrangement too and will be available in Wi-Fi-only and LTE types .

Final, it’s not just the Galaxy S8 series that is forthcoming from Samsung but there is the Galaxy Tab A8 device that too is lined up for launch in early 2022.While the S8 series will make for a flagship offering, the A8 will serve as an entry-level tablet at best.